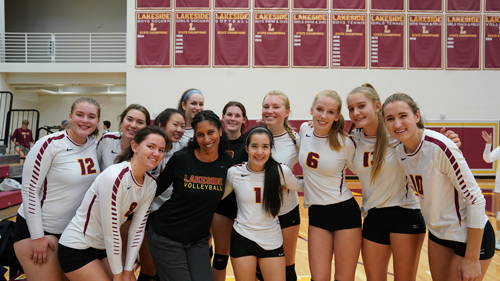 Observing excellence – in coaching, effort, and support
Share to FacebookShare to TwitterShare to LinkedInShare to PinterestShare to EmailPrint this page
Oct 23 2017

In my effort to understand different aspects of the Upper School, I have spent time visiting classes, shadowing students, and attending athletic events and student performances. Seeing students, faculty, staff, and coaches creating, thinking, and collaborating is incredibly inspiring. I feel fortunate that observation – of all the incredible things that happen at Lakeside each day – is an important part of my work at the school.

Recently, my observations included shadowing Jeff Kim, the new volleyball program head and varsity coach, and seeing firsthand his work with the impressive young women on his team.

As I made my way toward the gym on a recent Friday afternoon, I was excited to observe but I was also quite tired after the school day. I wondered how the girls would do, given the two-hour practice ahead of them. When I arrived, the students, Jeff, and assistant coaches Mark Peterson and Mary Lou Ames were gathered around a rolling whiteboard that illustrated a comprehensive plan for the day’s practice. They began with a video one of the senior players, Sam F., had brought to share. It was an inspiring piece about April Ross, a player on the silver medal-winning Olympic volleyball team, and her approach to practice, “If you come in with the right mentality… and you’re focused on every drill and you give it your all…the game takes care of itself.” When the short video ended, Sam stood and shared why she felt motivated by the clip and offered her own encouragement to the group. Like any good academic lesson, this opening grounded students in the important aspects of their practice together: resiliency, encouragement of others, and collaboration.

From there, students moved onto the court and though an impressive array of exercises that focused on key skill areas. Early on in the practice, they fell short of the goal in an exercise. Coach Kim said, “We want to keep our standards high because we know what you are capable of. If that’s the best you can do, we can move on.” To which students responded almost in unison, “No, we can do better,” as they ran off to give the drill another try. And they did do better.

When the team scrimmaged at the end of practice, it was impressive to see how they were using the skills they had just practiced. The girls’ enthusiasm and energy never waned. Even 15 minutes after the official end of practice, when they finished their scrimmage, their focus was clearly at a peak.

More impressive was seeing the coaches and the athletes in their game the following Wednesday. They played our rival Seattle Prep and though they won, it was not an easy game. The team’s resilience was evident when they conceded a point, or made a misjudgment, and then came back with an effective strike or a powerful block on the next play. When someone missed a point, she didn’t have time to sulk or lose focus. Encouragement came from the bench as coaches and other players yelled out, “Shake it off” and “You got this.” Other girls on the court came by to slap a high five. And friends in attendance visibly projected their support by wearing the girls’ away jerseys (see a picture below) – even when the jerseys were clearly constricting some of their much-larger frames!

Not only are our students learning athletic skills in their well-designed practices, they are also learning to support one another, to push themselves to their limit, and to move forward when they make mistakes or when their best efforts don’t end in success. These lessons are valuable not only on the court and field, but in the classroom and in life outside of school.

You can see the girls volleyball team in action as they head into postseason play. Find their schedule – as well as all other Lakeside teams – on the athletics calendar. 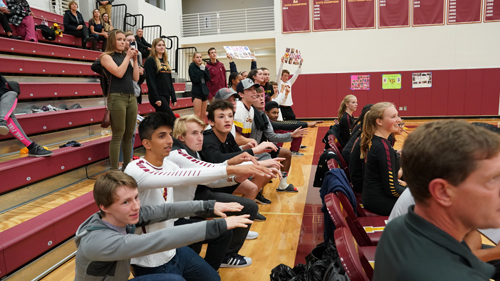