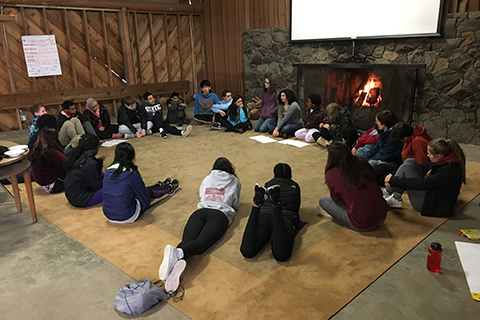 On the SAC retreat, thinking about how class has affected my success
Share to FacebookShare to TwitterShare to Google+Share to LinkedInShare to PinterestShare to EmailPrint this page

I never thought about how my class has affected my success until I went on the Student Awareness Council (SAC) retreat. I've always considered my family comfortably middle class. When looking at other kids who came from families with a lot of money, I would never put myself in the same bracket as them. We never took extravagant vacations. Instead, we went on camping trips, and I haven't even flown on a plane since I was eight years old.

However, on the SAC retreat, before we started our discussion on class, we participated in a group activity. We walked outside to a relatively steep dirt hill, and were told to line up horizontally across it. Our leaders informed us that we were having a footrace to the top of the hill, but before we started, they would say a few statements, and ask us to take steps forward or backward if they applied to us. These ranged from, "step backward if your parents are immigrants," to, "step forward if you've vacationed outside the country," but they were all related to class in some way. By the end of the statements, I was surprised to find myself at the very front, and only the second closest to the finish line before the race had even started. I had a huge advantage, but I felt guilty about it.

Even though I had considered myself middle class, my perspective of what defined class in the first place had been skewed towards wealth. The exercise got me to question how much of my success is due to my own personal achievements, and how much is due to the environment I had the privilege of being raised in. Obviously I got into Lakeside on my own academic merit, but that academic merit was built up by the resources of supportive parents and a good K-8 education, something not everyone is fortunate enough to have. I had the potential to succeed, but I was raised under the right circumstances so that my potential was able to be realized. I felt guilty for not realizing the substantial advantage I had. However, this also caused me to leave the SAC retreat more aware of the benefits my situation growing up has given me, and the fact that my situation is more the exception rather than the norm, and it has made me incredibly grateful of the opportunities I have been given in life.