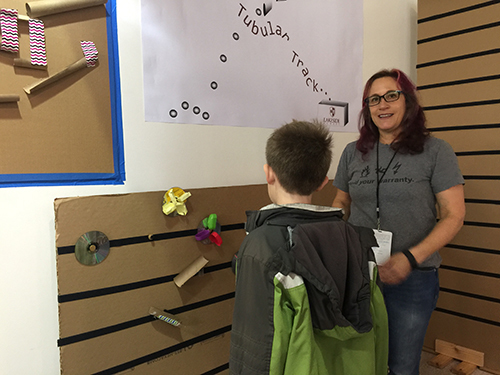 I have to wonder what I was thinking. Why did I sign up to take on "one more thing" when I knew I would be busy with the start of the school year? I was especially wondering on a recent Friday night, hours before the Seattle Mini Maker Faire opened.

Last spring I saw an email requesting proposals for participation in the fair. I had been to the original Bay Area Maker Faire in May 2013 as an attendee and the Seattle Mini Maker Faire in June 2013 as the advisor to a group of Lakeside students (Alec Glassford, Chinmay Nirke, David Inglis and Michael Shum) who were presenting the results of their independent-study work: the Sassy Chessboard. Both events were incredibly entertaining and educational.

In the intervening years, I always told my computer science classes about opportunities like this but I didn't feel like I had the "idea" to participate myself. This year a "marble track" (basically something like this: http://www.superdairyboy.com/Toys/frigits.html) was one of the ideas proposed during a group project brainstorming session in our Making It Real: 3D Modeling and Printing class. While it was not the "winning" project, it got me thinking about design and iteration.

I have been trying to get students to see 3D modeling and printing as a step in the prototyping process, where prototyping with low-fidelity materials should be the first thing we do, but often students feel like the printed plastic is the "end result." So I thought I could model what I was preaching: Instead of creating the track out of plastic, we would provide low-fidelity prototyping materials – toilet and paper towel tubes, cut plastic bottles, tape, scissors, glue, wire and other upcycled items, and of course the marbles – and have Maker Faire participants develop a track.

I started with a sample proof of concept, created with random materials in my house (video here: https://youtu.be/aRtkJr4PbDw). While it didn't work super well, I was convinced it could work on a larger scale. My vision was 4-foot x 8-foot boards with hook-and-loop tape so the tubes could be configured in different patterns.

I spent most of the summer thinking about how to implement the booth and collecting paper tubes, but not really doing any testing. The start of school and a few planning meetings brought on the "I'm not ready" panic and I sent the call out to others who could help. I organized my thoughts, the schedule, and the parts list in a shared document, and received terrific suggestions from fellow Lakeside teachers Tracey Sconyers, Mike Town, and Jacob Foran, as well as junior Christopher L. I was mentioning my concern about the weight of 4x8 pieces of plywood when math teacher Karl Erickson told me about the Smart Board delivery in our building – the shipping container had two perfectly sized (and light) pieces of cardboard. Using an idea from Mike Town, who teaches an engineering class here, I developed "footings" to hold up the boards and designed how the 8-foot x 8-foot space would look for the actual event. (See the finished product in action here.)

In the end, Lakeside had three booths at the two-day Maker Faire. Christopher L.' 18 demonstrated three projects: the 3D printer he built as his final project from 3D modeling and printing class, as well as IntelliSplash and IntelliFence. Seniors Eli F., Hans G., and Andrew W. demonstrated a virtual reality maze they designed to work with Google Cardboard, which originated in work they did together at a hackathon. And Jonathan H. '21, Tracey Sconyers, Janelle Hagen, Rob Sjoberg, Charlotte Blessing, and Amanda O'Neal helped out at our booth, where we saw a steady stream of approximately 150 kids and adults stop by. Some only tried a marble out on one of the tracks. Others immediately jumped in to develop the maze of tubes and plastic. Sometimes it took a little cajoling: We would suggest they run a marble down a part of the track we knew didn't work. When it failed to reach the intended target, we could ask the participant to help us fix the booth – often they would. Most remarkable was seeing the difference between Saturday night (when I left) and Sunday late afternoon when I was able to return after taking part in a panel discussion about how to "teach the maker mentality." People had extended the track from the highest point on one board all the way to the lowest point of the other, and had created some interesting jumps and rails along the way.