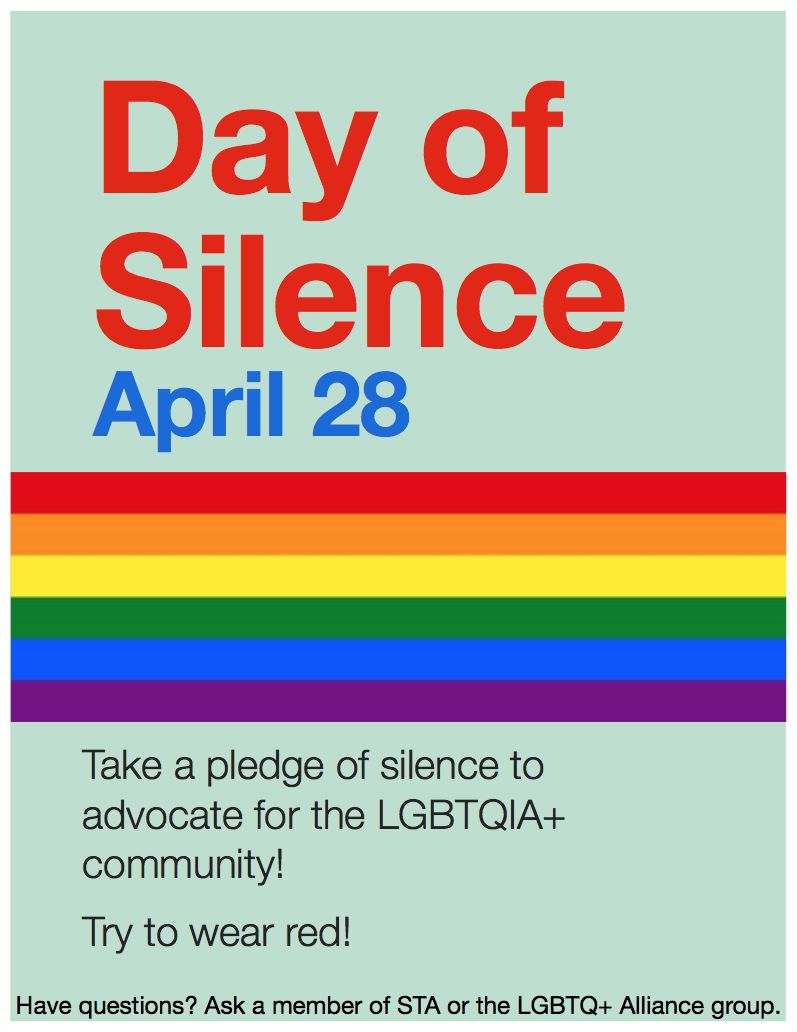 Seventh-graders answer: Why are you silent?
Share to FacebookShare to TwitterShare to LinkedInShare to PinterestShare to EmailPrint this page
May 15 2017

Three Lakeside Middle School students recently shared why they participated in GLSEN's Day of Silence – a student-led national event bringing awareness to the silencing effects of anti-LGBTQ name-calling, bullying and harassment in schools. Students from middle school to college take a vow of silence in an effort to encourage schools and classmates to address the problem of anti-LGBTQ behavior by illustrating the silencing effect of bullying and harassment on LGBTQ students and those perceived to be LGBTQ.

For the Day of Silence, most of my friends and I stayed silent for the entire day. We all tried to wear red, and even colored our hair red at lunch. Most of us signed a poster to show why we were being silent. For example, the poster said, "Why are you being silent?" and we would write "my aunt" or "my friends." Some of us even tattooed our face (temporary of course!) with things like "shhhhh!" or "Day of Silence." Lastly, I tried to imagine what it would be like to be silenced and I tried to think about how it feels to be in their shoes.

I chose to participate in the Day of Silence for my best friend who is silenced and all of my family members and friends who are part of the LGBTQIA+ community. I had a lot of difficulty staying silent for the day. My entire family said I couldn't do it because I talk so much! But, this experience made me think a lot about how bad it would be to have to keep a key part of your identity silenced. I would hate it. My best friend is lesbian but she lives in a place where she would not be accepted if she came out. Since she is unable to talk about this part of her life to anyone on a daily basis anymore (because I moved away) she has become very quiet and she is normally pretty sad. This shows the effect being silent has on people in the LGBTQIA+ community. Since I wasn't speaking, I had a lot of time to think about how I would never want to be silenced and how I feel extremely bad for people who are. At the same time though, I honor them. It takes a lot of bravery to be silent because of what society says isn't normal. I hope that whoever feels as though they need to be silent may one day find their voice and use it because we are all unique and deserve to be ourselves.

I'm part of the LGBTQ+ alliance group at school, and at our most recent meeting before Day of Silence, lots of questions were asked about why Lakeside does Day of Silence. "It's a day to support the LGBTQ+ community, but how?" "How does staying silent mimic what they have to go through?"

Recently, my friend who identifies as bisexual at the moment started going out with another girl. Although she was really happy, she wasn't able to tell her family or other friends about her girlfriend because neither of them were out yet. When I spoke to her about it she said that she was just really frustrated that she couldn't tell the people close to her about her girlfriend without sharing a big part of her identity that she wasn't ready to put out there yet. When I was participating in the Day of Silence, I kept having something I wanted to say to my friends but I obviously wasn't able to, and I found it really frustrating to have to stop myself. I imagine that that's how my friend feels too, because every time that she wants to tell a friend about her girlfriend she has to stop herself just because she's scared of how others will react. I know that a lot of people participating in Day of Silence don't get that, and participate only to raise awareness, which is of course, great too. But I'm hoping as the Lakeside community becomes more accepting of the LGBTQ+ community Day of Silence will be a day of empathy, and not just sympathy.