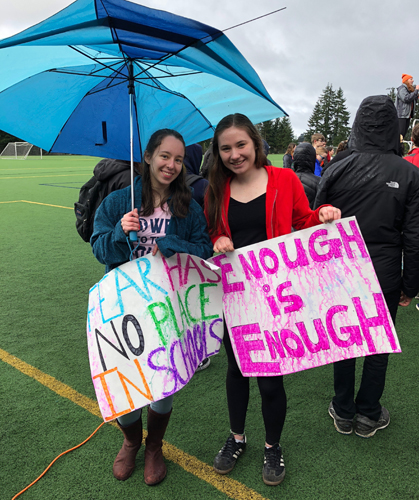 Lakeside’s Gun Violence Prevention Walkout this morning (Wednesday, March 14) was the biggest student demonstration I’ve experienced in my time at Lakeside, and it was a huge success! Part of the national walkout movement to protest gun violence in schools, the Lakeside walkout was a completely student-driven event organized by myself and three other students. While the school administration fully supported the walkout and its message, they emphasized that the protest’s power came from the fact that it wasn’t a school-sanctioned event, but a student demonstration independent of the administration.

The walkout itself began after 1st period this morning, when several hundred Lakesiders convened on the field and walked together along 1st Avenue and 130th Street to join the protest at Ingraham High School. There we heard from several speakers including students from both schools, Seattle City Councilmember Debora Juarez, and Washington State Senator David Frockt. We were also joined during the walkout by Yazmin Mehdi, the outreach coordinator for U.S. Congresswoman Pramila Jayapal.

As one of the four student leaders that planned the walkout, I really enjoyed encouraging my peers to participate and was proud to see such a big turnout. The energy during the walkout was very positive, although there was also a big focus on the students’ impatience and frustration over the government’s inaction in responding to the series of school shootings that have occurred around the nation.

An important distinction that was made during the walkout speeches was that the gun violence prevention movement is NOT in opposition to the second amendment, and it isn’t demanding a completely gun-free America; instead, it is simply asking for three things to help prevent gun violence in schools, homes, places of worship, and other public spaces:

The most powerful part of the protest for me was an idea that Senator Frockt spoke about that I think applies to much more than just gun control policies. Frockt explained that obviously we should continue working to implement more logical gun control laws, but there’s another thing the world needs more of: kindness. Just like demanding a change in our policies, part of ending gun violence is supporting each other and helping to prevent others in our communities from feeling the need to act out in violent ways.

Another important idea Frockt spoke about was the power of the public, particularly students, in affecting the decisions their legislators make. His message to us was that the public is always ahead of policy, and therefore it is our responsibility to push policy in the right direction. By participating in the walkout and choosing to sacrifice a few hours of our school day to send a message to the rest of the nation, we were contributing to that effort.

Cars honking as they passed us, people cheering and holding signs, and the energy of hundreds of students standing together was empowering for me, and it reaffirmed my confidence in our ability to make change as students. It felt good to know that we were making an impact, however small, to demand changes that we believe should be made.

It is easy to hear news stories about government standstills or communities experiencing yet another act of gun violence and dismiss ourselves as bystanders. The walkout was about reminding ourselves that we are part of this discussion, that our voices do have the power to change our policies, and that our rights as citizens give us the ability to do so.

The national high school walkout was just one event in the gun violence prevention movement. If you are interested in continuing to support the movement and its message, there are a variety of ways to get involved:

Your voice makes a big difference!