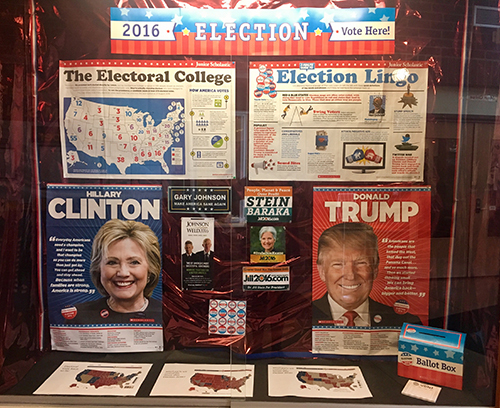 Teaching the election, with optimism
Share to FacebookShare to TwitterShare to Google+Share to LinkedInShare to PinterestShare to EmailPrint this page

In our 8th-grade history course, Living in the Anthropocene, we launched the year with a unit on current issues of relevance and the 2016 presidential election. There's been a lot of talk about how to teach this election – especially to younger students – and we sought to create a learning environment that was free of political bias and agenda. We wanted students to gain an understanding of the election process (Article II of the U.S. Constitution, how candidates are nominated, the Electoral College, etc.); how candidates use stump speeches, the media, and advertising to sway voters; and what the candidates' views were on major issues. And, as much as possible, we wanted to let the students figure out their own views and give them a dispassionate and optimistic view of how the system works.

On the very first day of class, students brainstormed important issues in this election: those with local impact (e.g. transportation), national (trade), and global (climate change). As teachers, we wanted to learn what issues our students felt were most pressing and expose them to the positions of the political parties on those issues. Lakeside 8th-graders were particularly interested in climate change, homelessness, and gun control.

We asked each student to list three issues of particular interest (one local, one national, and one global), and then select one to research further. Using a range of sources, students created slideshows in which they defined their issue, shared facts and statistics, investigated organizations that are working to address the issue (governmental and non-governmental), and shared their own hopes for the future regarding the topic.

To conclude the project and to connect it to the subsequent election-related lessons, students researched the American political-party platforms on their chosen issues and created charts that compared the views of the Republican, Democrat, Libertarian, and Green parties. Students then identified the party positions that agreed with their own views on their chosen topics. This approach was an effective way for students to think critically and expand their awareness of political parties beyond the traditional two-party perspective.

Building on this understanding of issues, we then turned to the process of the presidential election. Students learned about the Electoral College and "battleground states." They examined campaign techniques, analyzing stump speeches and campaign ads. They compared and contrasted the candidates' views on a variety of issues including immigration and the economy.

Students capped off the unit by taking a quiz to match their own positions on the issues with candidates' positions from all of the major parties, noting areas of alignment. When they focused on the issues rather than on the candidates, some students were surprised to discover that their views matched the positions of the Libertarian and Green parties, rather than those of the main two parties.

As teachers, it's been exciting to watch students' perspectives expand and shift based on their exploration not only of the American political process, but also a meaningful exploration of what they themselves believe. We think they've emerged from the experience better informed about the issues, the candidates, and the American presidential campaign process.