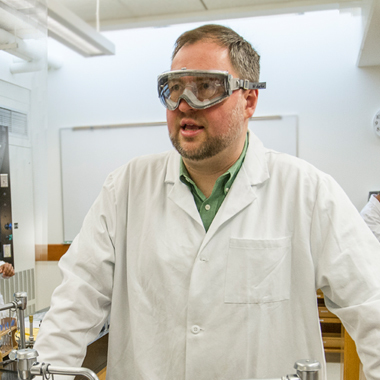 I recently spoke with some parents and guardians about what and how their students are learning. As part of the talk, I brought along a collection of scent bottles and molecular models that I've used with my Organic Chemistry students. As the parents and guardians guessed at the smells, I talked about how the class has been looking at levels of structure in organic compounds, and how those structures give rise to chemical and biological properties of various compounds, including how they smell. I chose these particular items not only because they seemed fun and interesting, but also because they illustrate an important aspect of the kinds of teaching and learning that we do at Lakeside in 2016.

My own high school experience in the early 1990s was pretty different from what Lakeside students encounter today. One really big change has to do with the role of a teacher. When I was in high school, my teachers were primarily content-knowledge specialists, and we spent most of each day learning content. The teacher would come in and tell us about the Hundred Years' War, or the stages of mitosis, or the factors that affect the rate of a chemical reaction, and we would write those things down in our little notebooks. After a week of writing these facts in our notebooks, we'd have a test where we'd write these same things down on a test paper. And then the process would repeat. It was surely the case that we learned other things in school, but content was king, and it often seemed as if the teachers' primary job was being the source and transmitter of that content.

Skip ahead to the present day. Students now carry the sum of all human knowledge on their person, in the form of a laptop or smartphone, and they are becoming experts in how to access that information. Last year in my Organic Chemistry class, we were discussing the geometric changes in the transition state for a common organic reaction called SN2. A student asked if there was a special name for this change, and I responded that I thought it was just called an "umbrella inversion" because it looks like an umbrella turning itself inside out in a stiff breeze. No sooner had I said that than a student raised his hand and told me that, according to Wikipedia, it was called a Walden Inversion. It's now common during a lecture or discussion for students to follow along on Wikipedia, the MIT OpenCourseWare site, or some other internet resource to augment their learning and understanding. They're not out to undermine the teacher – they're just looking to supplement their understanding.

So, after I learned that the SN2 transition state is really called a Walden Inversion, we had this recurring joke about how Mr. de Grys was just like Wikipedia, only less accurate. And we laughed a lot about that, and that was hysterical ... until it wasn't. Because if you see a teacher as just a content specialist whose job it is to transmit facts and information, you have been totally replaced by Google, Wikipedia, and the rest of the online world.

So what is it about a Lakeside education in 2016 that transcends the simple information-dissemination model? It's that we are focusing on things like skills and habits of mind. We're teaching students how to be effective communicators and negotiators. We're helping them to understand context and nuance. How to be global citizens. How to be critical thinkers and problem-solvers. And certainly the content – the information itself – is also still important. If you want to understand how to make a car engine more efficient, or what is going on with the 2016 presidential election, you have to know physics and math and history and psychology. But it's the development of those skills and habits of mind that I think sets a Lakeside education apart, and it's those skills that will help them survive and thrive in their personal, professional, and community lives in the mid-21st century. Finding a fact in the age of Google is trivial. But knowing how to answer those questions that you can't Google is becoming increasing important.

Which brings me back to the smell demos that I brought for the parents and guardians. I like them as an analogy of what we're trying to do at Lakeside, because determining what smell is in each bottle is really hard if you don't recognize it ... because you can't Google a smell. Identifying a particular compound by examining its structure is also really hard ... because you can't easily Google a molecular shape.

The kinds of challenges that our students will face in the future will be like trying to figure out what a smell is, even if you've never smelled that particular smell before. If you are just relying on a store of factual information and the internet, and you don't have any ideas about what that odor might be, you're just out of luck. But if you have the kind of education that we're trying to build at Lakeside, you might say: "I don't know what this is, but I have some good ideas about how I'm going to find out."