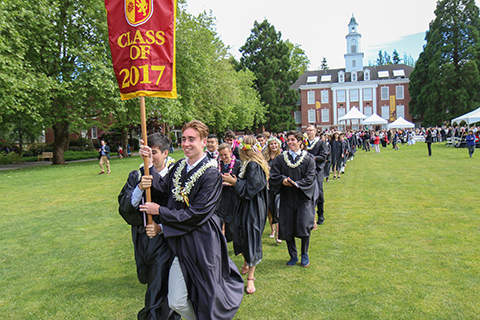 The Class of 2017: They made it their own
Share to FacebookShare to TwitterShare to LinkedInShare to PinterestShare to EmailPrint this page
Jun 8 2017

At Lakeside's commencement exercises June 8, Upper School Director Alixe Callen chose the word "idiosyncratic" for the traditional one word to characterize the essence of the class. "Class of 2017, you defy definition," Callen said. "You have managed to make your senior year, and honestly your four years of high school, completely your own."

The word idiosyncratic, she said, "is derived from Greek roots, and essentially means, of its own mixture. Class of 2017, no doubt you are of your own mixture – and better for it."

As examples illustrating her reason for the moniker, she noted that, in the school tradition of a themed dress-up day in the spring, the senior class chose the theme of – sardines. And the theme they chose for their winter ball was "earth tones."

She also cited many and varied accomplishments of individual seniors and their teams, reflecting academic (including nine National Merit scholars, a nationally ranked math student), artistic (including seven state high school photography contest awards), and athletic prowess (including that "the girls swim team has won an unbelievable three state championships in a row"); and their passion for social justice, and commitment to each other ("at the prom, for instance, an entire advisory chose to delay their dinner until after sundown in support of those observing Ramadan"). She also included some unusual categories ("One of you has a fishing blog ... Another broke the Guinness Record for typing the world's fastest text message."). Read her full speech here.

On the podium to represent the 140 graduating seniors were Michael Lane Chandler and Isabella Marie Frohlich, the duo chosen by classmates to speak, and Yasmin Luthra, outgoing president of Upper School Student Government.

Isabella and Michael began with a dance routine, fidget spinners in hand, to the song, "I Will Survive." Michael noted that, "To give a short summary, our class is comprised of CEOs, a Presidential Scholar, crazy musicians, singers, and rappers, sports stars on national teams, filmmakers, actors, authors and playwrights, chess players, activists, and the list goes on. " Isabella noted that, more important, "We've thrived by really coming into our own as a caring, supportive family for one another." Read a longer excerpt from their speech here.

Said Yasmin: "I believe that Lakeside will continue to come back to us in little and big ways as we move on from this place. It's like how when you finish a really good book, and though you may never open it again, the characters never really leave you." Read a longer excerpt from her speech here.

Head of School Bernie Noe noted that his message to students at the beginning of the year to slow their lives down did not get a lot of traction. Lakeside students are motivated and goal oriented, he acknowledged, and they told him they have too much they want to do in life. So, he said, he was retooling his message to urge them to set aside time in their lives for regular, quiet reflection, to gain perspective and "to connect you with your own values and guide you in your busy lives."

Noe encouraged the new graduates to make time for personal relationships as well as professional success and for contributing toward a purpose greater than themselves. "The time issue is really a values issue. We do have time for what we truly value." 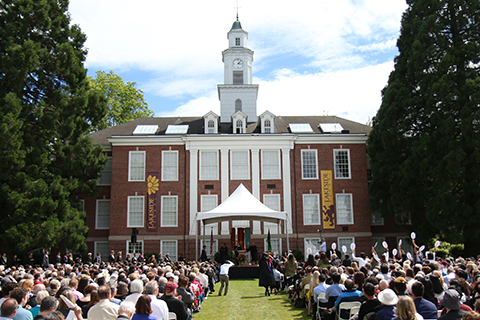