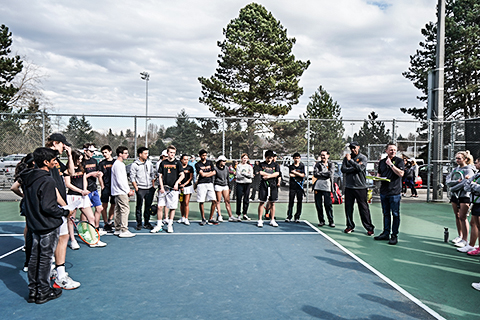 This week, Lakeside Tennis will take on their arch rival, Seattle Prep, in a regular season finale poised to be as dramatic and exciting as ever. Why should you come watch? The tennis team is not just equipped with great players - they have superheroes.

Remember Ben 10? Fantastic show on Cartoon Network, don’t @ me. One of the aliens, titled “Echo” had the ability to take down villains with his loud sonic voice. The team has someone similar in Quinn G. '19. You see, when Quinn wins a point, the ensuing “LET’S GO” can be heard from the inside of a plane traveling above the courts. He is one of the most passionate players out there, really putting everything into each point. Because of the intensity he carries in each shot, watching his matches is an experience like no other. Sometimes he hits a serve so hard that you can’t even see it. Other times, he’ll best someone in a 20-shot rally for the ages. What makes Quinn so impressive is how much he cares about his teammates. I’ll often be playing 6 courts down from him, and in the middle of the match, hear a booming voice resounding encouragement. It sounds like Dwayne "The Rock" Johnson is yelling into a microphone directly above me. When he’s not actually playing, he’ll be hyping everyone up that is, and making sure that people on the baseball field below and others that are still at Lakeside can hear him doing it.

The Marvel hero Quicksilver is famed for his superspeed. But he has never been spotted in the real world. Until now. On the tennis team, legend has it that Emma S. '19. plays at every match, yet it is very rare to actually catch a glimpse of her on the court. Why is this? She just finishes the match too fast. Her family and friends lament that they never get to see her play because by the time they get to the courts, she is already done. This is of course a testament to her great skill, but to see that skill, you really have to be there right when the match starts. When you get a chance to see it, it’s remarkable how fast she ends each individual point by a dart of a forehand, or a blazing passing shot. Her match is guaranteed to finish first every single week, sometimes alarmingly so. A couple of weeks ago, she was challenged by Alan Y. '19, a fellow junior whose tennis skills are nothing short of mythical. He polished off his opponent and left the court, confident in his own time. Yet Alan was met with the startling realization that Emma had finished her match so early that she had seen half of his as well. Shocked, Yim asked the coaches how this was possible. They shrugged their shoulders and informed him that the day before, Emma had finished her match before the early dismissal had even happened! To try to see Emma play this Wednesday during the regular season finale versus Seattle Prep, make sure to get out of class a few minutes early. Otherwise, you’ll probably be too late.

As we move through Metro League playoffs (and hopefully into state playoffs), look out for more writeups of our tennis superheroes! And be sure to follow along on Twitter at @LakesideLionsTE.