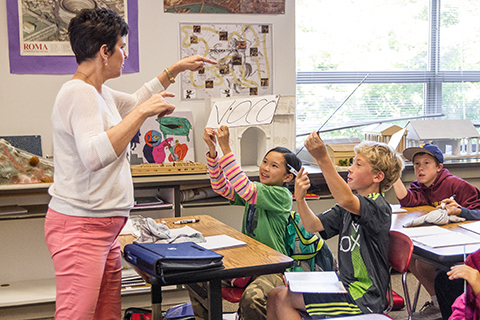 Why do we teach Latin at the Middle School?
Share to FacebookShare to TwitterShare to LinkedInShare to PinterestShare to EmailPrint this page
Oct 5 2017

I love being asked what I do. Inevitably, eyes widen at my response and some variant of this reply follows: “Teaching Latin? To Middle schoolers? I didn’t think kids learned Latin anymore.” This provides me with an irresistible opening to set the record straight.

Latin and Middle Schoolers are a perfect fit. The natural inquisitiveness of the middle school mind makes the language and world of the Romans a never-ending source of interest and delight. Students are amazed to hear, in the first week of class, that word order is unimportant in a basic Latin sentence—that unlike English you can scramble a simple Latin sentence any which way and still come up with the same meaning. The differences between Latin, which is an inflected language, and English, which is not, lead students to make instructive comparisons between the two and so gain a better understanding of the way in which their own language works. In this process, they become better speakers and writers of English, a huge advantage in a world where technology makes communication, both oral and written, an essential part of everyday living.

Students also gain access to a new world of words. In their younger years they were surrounded by common, everyday words — child, mother, friend — nearly all of which are of Anglo-Saxon origin. As they get older, they begin to meet up with the Latin half of the English language, words that are generally more difficult, contain a lot more syllables and can get in the way of reading and writing. In learning Latin words like inimicus (hostile), mendax (liar), or circumspecto (look around), they can readily pick up the English derivatives inimical, mendacious and circumspect. Being middle-schoolers they have a particular affection for derivatives they can put to immediate use on friends and family like defenestrate, puerile and uxorious, a fondness I encourage with our Word of the Week, as it gets students playing with words. They also love learning that words have histories which can illustrate movements of peoples across the globe or simply prove fascinating, as in the case of the word "muscle" which comes from musculus, little mouse, or "lemur" which comes from lemures, ghosts. In any case, this interest in words and the accompanying expansion of their vocabularies also aids in sharpening communication skills.

You can’t teach Latin without learning about the people who spoke the language and the Romans, whose history and culture exemplify the best and worst of human nature, are a captivating subject for middle schoolers. As we talk about the admirable aspects of Roman life, architecture, engineering and poetry and the not so admirable gladiatorial combat, slavery, and conquest, students draw cultural connections to the modern world and gain a deeper understanding of essential elements of western culture. Just as importantly, they learn that the Romans also differed from us in many ways and these insights help them to increase their cultural understanding and their awareness of diversity.

I could go on ad infinitum about the advantages Latin offers, from aiding budding scientists, doctors and lawyers to paving the way for the acquisition of a Romance language, but I’ll stop here and invite anyone interested to visit room 214, the Middle School Latin room, to check out our Word of the Week and Interesting Etymology boards and to soak up some Roman culture.