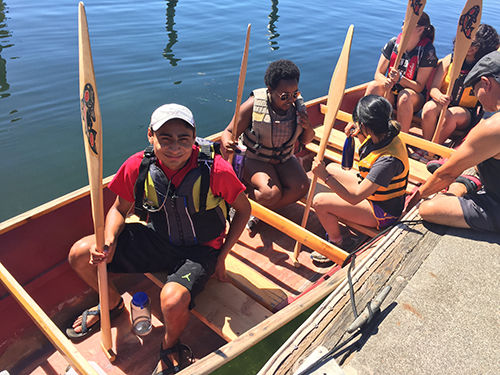 Why So SALTy?: A retreat for affinity and alliance group leaders
Share to FacebookShare to TwitterShare to LinkedInShare to PinterestShare to EmailPrint this page
Sep 2 2016

Salt—it's the universal ingredient which adds a little pizzazz to life. That's kind of what Lakeside SALT—the Student Alliance/affinity Leadership Team—is too, a gathering of various cultures and perspectives adding spice to the Lakeside campus.

During the dog days of summer, just before fall sports practices started up, several SALT leaders along with our faculty advisor, Dr. Debbie Bensadon, traveled around Seattle to experience the various cultural aspects of the city. Our activities ranged from eating some of the ethnic food Seattle has to offer, like dim sum in the International District and Mexican at El Camión Adentro, to talking to survivors of Japanese American Exclusion during WWII on Bainbridge Island, and canoeing at Golden Gardens with leaders of the Puyallup Canoe Family, a family I have paddled with on the Intertribal Canoe Journey since I was a little kid.

The SALT excursion allowed us student leaders to understand, as a group made of this diversity, what exactly our organization embodies, and allowed leaders to see beyond our own clubs and work toward one of our common goals of intercultural understanding.

During the trip I learned secondhand how the Japanese-American struggles during WWII—of American principles being disregarded to serve short-term interests—don't seem much different from the struggles Native Americans have undergone (and still do). I also learned from my peers during the canoe trip how much crew rowers have in common with canoe pullers.

Too often individuals can become stuck in their own perspectives, originating from the environments in which they were raised. This can create barriers in understanding between groups. Sharing our cultural experiences, we realize how we are different in some aspects, but very much alike in others. This is why diversity is valued at Lakeside.

Alliance and affinity groups are Lakeside clubs that allow students of color and difference to not only reaffirm their own culture, experiences, and identities, but to also share their experiences with others, hopefully building a more understanding campus and cooperative community. I, Ravi S., member of the Makah Tribe, along with Kallin S. (Aleut) are leaders of the Native American Student Alliance (NASA), a small club founded last year. We plan to provide the Lakeside community with a taste of Native history, politics, language, art, rituals, and food during the coming year, hopefully beginning to share some of our unique and common perspectives.