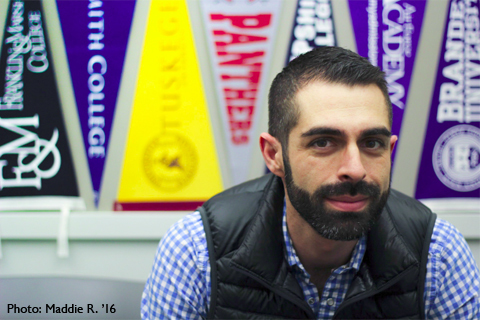 Lakesiders have what Lori Loughlin and Felicity Huffman lacked: Ethical Mindsets
Share to FacebookShare to TwitterShare to Google+Share to LinkedInShare to PinterestShare to EmailPrint this page

After 17 years in the field, I'm still shocked by the recent college admissions scandal. I've heard of isolated incidents of fraud and deception over the years: falsified transcripts, plagiarized essays, and cheating on standardized exams. But I've never seen such a systematic exploitation of the admissions process. The number of college coaches, ACT and SAT exam officials, and independent counselors that devised these elaborate schemes has left my head spinning. Why do some families see cheating as the appropriate antidote to a stressful process? What message does this send to students? When they become adults, what will their ethical framework look like if adults are modeling unethical frameworks?

As I've processed my own frustration and disappointment, I've found solace and inspiration from the example of our students. Their ethical mindset, if continually affirmed and nurtured, will build a future where integrity and honesty are paramount.

Before elaborating on this ethical mindset, let's briefly review the scandal.

How it Worked
There were two ways William Singer, an independent consultant, helped families cheat. The first was by bribing ACT or SAT officials to correct students' answer sheets prior to scoring them, to take the exams for students (the ACT and SAT have strict security measures that include presenting a photo ID, so he also paid exam proctors to look the other way), or to grant students extended time even if they didn't qualify for it.

The second method was bribing college coaches. At Division I (the most intense of the three collegiate sports divisions), coaches have admissions "slots" for talented athletes. At the most selective institutions, some of which are implicated in this scandal (Georgetown, Stanford, University of Southern California, Wake Forest, and Yale, among others), the academic records of students filling these slots are first pre-approved by the admissions office.

During the pre-read, students must meet an academic threshold, though this threshold can be lower than for non-athletes. Once pre-approved, recruited athletes still submit applications, but this is almost a formality: provided the transcript and scores are consistent with the pre-read and there aren't "red flags" in the application, the athletes are admitted.

In this scandal, after being paid by Singer, coaches presented the students to admissions as talented athletes and had them pre-approved during the pre-read process, ultimately leading to their admission.

Who was impacted
The impact of this scandal is far-reaching. The exam administrators and proctors not only violated the trust of their colleagues and organizations; they impacted every student who took the tests. Both the ACT and SAT are scored on a bell curve; every testers' score is impacted by the performance of everyone else. The more strong-testers per exam, the harder for other students to achieve high scores.

Students rely on ACT and SAT officials to create fair testing conditions and scoring processes. While the number of inaccurate scores in this scandal is small (the curve for ACT and SAT is based on hundreds of thousands of testers), those scores still impacted other students' scores in small ways.

Admissions offices trust their coaches to recruit genuinely talented student-athletes, and that trust was flagrantly violated. College athletes rely on their coaches to recruit talented teammates; these coaches let down their teams when they filled slots with fake athletes. And applicants to the affected institutions who relied on admissions offices, college coaches, high school counselors – on adults charged with ensuring a fair application process – were let down. Spaces are limited on every college campus. For every fake athlete admitted, another strong applicant was not.

In fact, two Stanford students have already filed a class action suit, charging that they were promised a fair admissions process – and that colleges failed to provide this.

Imagining a fairer admissions process
While I've always believed the admissions system is imperfect, I've prided myself on working with colleagues – admissions officers, college coaches, other counselors, ACT and SAT exam officials – who strive to make the system as fair and equitable as possible. It saddens me how many educators are implicated in this scam, tainting a profession with so many well-intentioned people, and raising questions if we can offer students a fairer and more equitable process.

Of course, the process will never be perfectly fair. Admissions officers, despite striving for objectivity, still review applications through a human lens, which is inherently subjective. Colleges will always have to balance admitting students who fill institutional needs alongside accepting the academically strongest applicants. And there will always be some families that try to game the system. But I know we can do better than that current system.

As I've struggled to reconcile my commitment to the field with this disgraceful scam, I've found hope through our students. There is a stark contrast between the bribery in which these families engaged and the ethical mindset of Lakeside students. Despite the importance of college, they almost always take the ethical approach – demonstrating honesty, compassion, respect, and knowing right from wrong.

I've seen talented athletes who were recruitable at the most selective universities decline the opportunity because they decided to discontinue playing and knew it would be unethical to lie to a coach, the team, and an admissions office. College applications require students to list the time they commit to activities; our students obsess over listing accurate figures – sometimes even down to a decimal point – because they strive for honesty in their applications. Every year, I see students admitted to their top-choice schools withdraw their remaining applications, freeing space for another deserving student rather than collecting acceptances for themselves. I even had one very principled student who refused to list his mother's alma mater in his application because he believes the practice of legacy admissions is unethical – that it preserves social inequality in the United States – even though it would have given him an advantage in the admissions pool at that school.

I don't know if I'll see a truly fair and equitable admissions process during my lifetime. The intricacy of this scam makes it difficult to imagine. But as I prepare to see another graduating class depart for life after Lakeside, I'm realizing that our students truly possess "ethical spirits." In a world filled with scandals, corruption, and greed, I hope they'll use their spirits to build a better future.

Ari Worthman is Lakeside's director of college counseling. Reach him at collegecounseling@lakesideschool.org