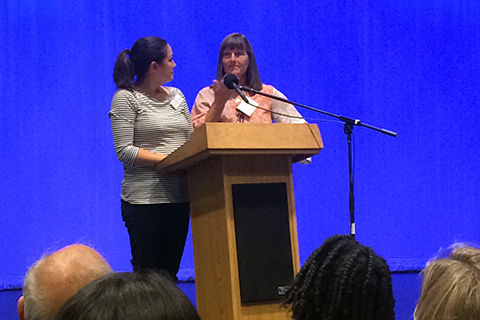 Lakeside faculty and staff reconvened on campus in late August, to think critically about the craft of teaching and how to build an inclusive community that supports students.

Much of the professional development was focused on learning related to Lakeside’s initiative Our Work Together: Inclusion, Multiculturalism, Respect. Jamie Asaka, director of equity and inclusion/director of student and family support, and Charlotte Blessing, director of global education, introduced the day as an opportunity to grow in cultural awareness and understanding. “We are all learning,” Asaka said to the faculty and staff, and “all in different places and spaces in this journey.”

The morning was devoted to learning about the history of systems that codified racial prejudice, racial discrimination, and racism and how these manifest in our community. History teachers Stephanie Wright and Merissa Reed – who also serve on the diversity, equity, and inclusion team – led a session on systemic racism, which includes the policies and practices entrenched in established institutions, which result in the exclusion or promotion of designated groups. It differs from overt discrimination in that no individual intent is necessary (definition from STAND: Framing and Learning Anti-Racism, University of Calgary). Following this brief introduction to the complicated topic, faculty and staff read the 2014 article “What white children need to know about race,” by Ali Michael and Eleonora Bartoli in NAIS’s Independent School magazine (you can find the article here), and discussed it in pairs before sharing selected thoughts with the full group.

Wright and Reed then introduced a case study about housing in Seattle, specifically, the practice of redlining, which is the systematic denial of various services to residents of specific, often racially associated, neighborhoods or communities, either directly or through the selective raising of prices. They started by watching Gene Demby’s brief history of redlining for NPR (watch the video here; please note that the video begins with a clip that contains explicit language). Faculty and staff reviewed “Segregated Seattle,” a special project from the Seattle Civil Rights and Labor History Project at the University of Washington. The project includes maps, photos, documents, and newspaper articles that follow the history of segregation in Seattle up through the 1960s, and that targeted not just African Americans but also Native Americans, Asian Americans, Pacific Islanders, people of Mexican ancestry, and also, at times, Jews. Faculty and staff were asked to find their own neighborhoods in the segregation maps, and research if their neighborhood had racially restrictive covenants or deed clauses. The group then listened to “Walking the Red Line: A Tour of Seattle’s Discriminatory Housing Practices,” a 2018 audio report by Jennifer Wing and Gabriel Spitzer (listen to it here) before ending the session with a silent reflection.

The afternoon session focused on immigration. The group watched the 1986 short documentary “East of Occidental,” which tells the story of the inhabitants of Seattle's International District, a unique neighborhood where Chinese, Japanese, and Filipino Americans have come together as a political and social force. The film is used in Lakeside’s history curriculum and can be viewed through the Seattle Public Library. After, Upper School history teacher Bob Henry led a moving discussion with five faculty members who are immigrants or the children of immigrants, about their own experiences in America. 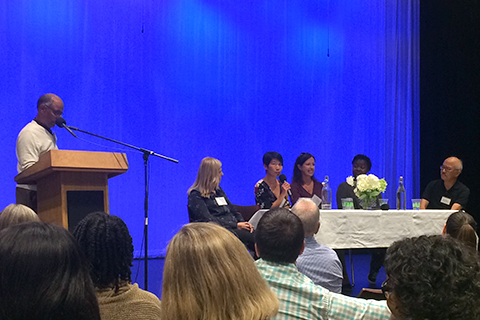 Many of the planned professional development days this year will be related to Our Work Together. “[Our] ability to name and claim our own racial and ethnic identities, our capacity and propensity to be curious and respectful about the racial and ethnic identities of others, and our authentic understanding about the way systems of privilege affect ourselves and others is critically important work,” said Elaine Christensen, Middle School director/director of professional development.

“It’s so important because I don’t think you can move forward until you not only acknowledge but embrace that it’s our country’s history,” said Upper School history teacher Nadia Selim, who is starting her second year at Lakeside. She and others found the Seattle-specific information to be helpful not only in creating curriculum but for understanding the city in which they live. “Redlining was certainly not unique to Seattle,” she said, “but to see the lines and the street names and how it was drawn and what that meant for the city was powerful.”